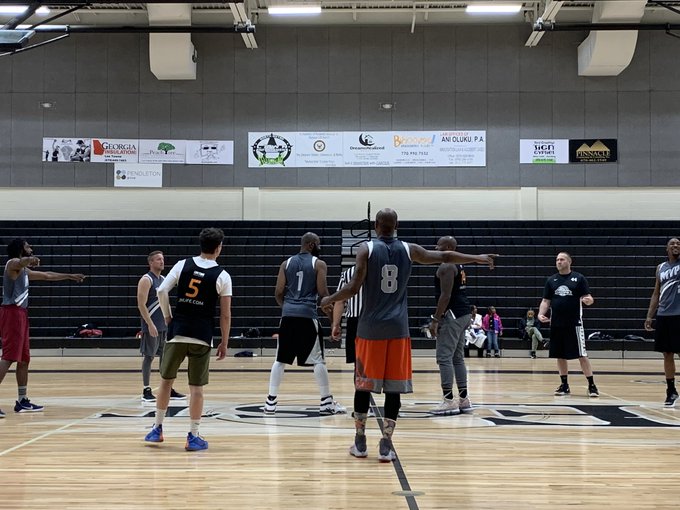 MVP (1-0) raced out to a 17-0 lead and never looked back in an explosive offensive performance to tip off Week 1 of the inaugural CTC Adult League. MVP drilled 21 threes led by Brian Rutledge’s 9 en route to 29 points, 9 rebounds, 2 assists, 3 steals and 1 block. Next Level (0-1) cut the lead to three at one point halfway through the first half and entered the half down 48-38 before running out of gas. Harrison Stewart led the comeback with 31 points, 4 rebounds, 3 assists and 4 steals while Dewayne Lynch posted 18 points, 18 rebounds and 4 assists, but the story was MVP’s dominant play keyed by exceptional ball movement and knock-down shooting. Logan Shoffner came off the bench to score 19 points and grab 9 rebounds while hitting 4 threes. Will Marsh was a super-sub as well, nailing 5 threes off the pine to finish with 17 points, 8 assists and 3 steals. Team Captain Shon Redding added 17 points, 17 rebounds, 3 assists and 1 steal. Bo Mason was the fifth player in double figures with 11 points (3 threes), 12 rebounds, and 6 assists. Brian Dunn added 8 points and 7 rebounds while Darryl Moore helped pound the glass with 4 points and 12 rebounds. As a team, MVP outrebounded Next Level 68-50. Next Level got solid performances from Team Captain Jeff Cox (12 points, 15 rebounds), Patrick Fischer (12 points – 4 threes) and Doug Rhodes (8 points, 9 rebounds, 6 assists) in the loss.

Brian Dunn is big on the boards for MVP pic.twitter.com/Jd29ynTZHQ

Dewayne Lynch gets downhill in a hurry! pic.twitter.com/qudz8yhq6m

Harrison Stewart trying to keep Next Level in it. #CTCAdultLeague pic.twitter.com/aTC0XQwzDT 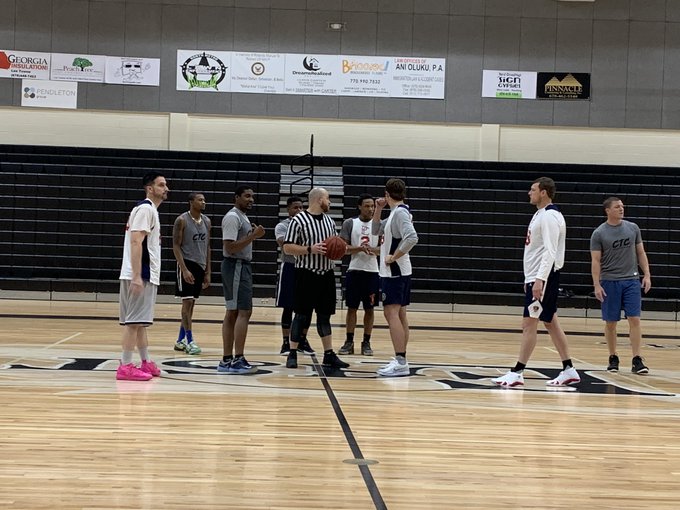 Trailing 37-30 at the half and falling behind by as many as 14 in the second half, CTC’s group of free agents came together to stun the Patriots (0-1) after Wayne Brown Jr. knocked down a three with 5 seconds left to send the game into overtime. The Patriots used their size advantage to build a respectable lead as Kevin Hammitt was unstoppable with 29 points, 11 rebounds and 2 assists. Hammitt scored at will inside while Zach Thompson cleaned up any misses, finishing with 12 points and 16 rebounds. CTC (1-0) led 15-13 midway through the first half before Hammitt and Javonte Williams (19 points, 7 rebounds, 7 assists, 5 steals, 1 block) started to pull the Patriots ahead. Looking dead in the water, CTC got a spark from Jay Burns, who hit his second three of the day to ignite a run that cut the deficit to 52-46 with 11:15 remaining. The Patriots offense started to bog down as CTC mixed and matched defenses to try and confuse the veteran group. Brown, who was held scoreless in the first half, scored all 8 of his points in the second half in timely fashion, hitting a three to cut the lead to one with just over a minute left. Trailing 63-62 with 60 seconds left, Brown missed two free throws but was able to redeem himself as CTC got more stops and the Pats left points on the board with crucial missed free throws late. Brown sized up a three from the right wing and drilled it to send the game to overtime tied at 67.

In the extra period, CTC’s scrappy guards remained relentless on defense as Jacques Wells (6 points, 4 rebounds, 1 assist, 3 steals, 1 block) and Jalen Clark (27 points, 8 rebounds, 1 assist) clamped down on defense. Clark went 4-4 from the line in overtime to secure the lead. The Patriots had one last Hail Mary attempt to end the game as Hammitt was fouled at half court on a three, down four. He missed his first attempt before making the second. The Patriots called timeout to devise a scheme with .8 seconds remaining. Hammitt missed the final shot on purpose and got a perfect ricochet and back tap from Doyle Spruell back to Hammitt, but his touch three-pointer rimmed out.

A last second miracle doesn’t fall as CTC rallies from down 14.

Back at his old stomping grounds, Keenan Lewis provided big plays throughout the game with his athleticism and energy, tacking on 17 points, 12 rebounds, 1 assist, 1 steal and 1 block. Brown, who hit the biggest shot of the night, had 8 points, 6 rebounds, 4 assists and 3 steals. John Thomason pitched in 4 points, 8 rebounds and 3 steals while Bobby Brent chipped in 4 points, 4 rebounds and one pretty assist.

Zach Thompson with a steal and layup before the buzzer.@coachhammitt has been a monster with 18 points & 5 rebounds.#CTCAdultLeague pic.twitter.com/j3rnuZDQ5G

Zach Thompson is stepping up for the Patriots. He gives them a 61-56 lead with 4 minutes left. #CTCAdultLeague pic.twitter.com/McoDzbIdWu