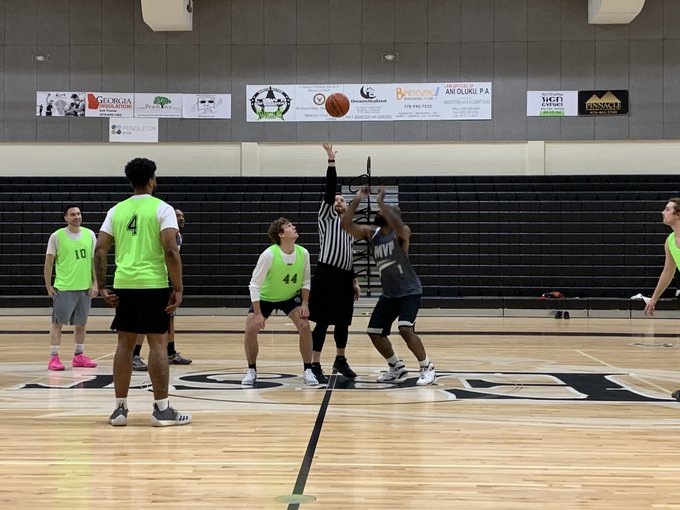 Tied at 34 at the half, MVP (2-0) unleashed a barrage of threes over the final 22 minutes to race past a scrappy Patriots (0-2) team. MVP hit 6 of their 10 three-pointers in the second half, five coming via Will Marsh who finished with 21 points and 3 rebounds. A week after sinking 21 threes in their season opener, MVP had to rely on their inside play to carry them throughout. Brian Dunn posted 21 points, 8 rebounds, 2 assists and 1 steal to pace them in the first half but the sharpshooting of TJ Choat and the addition of James “Tre” Arnold kept the Patriots in the hunt, even without Kevin Hammitt. Arnold (5) and Choat (6) combined for 11 threes, Arnold finishing with a game-high 29 points, 8 rebounds, 2 assists and 3 steals while Choat poured in 24 points and 6 rebounds. Javonte Williams added 14 points in the loss. Shon Redding helped MVP methodically stretch out their lead in the second half with two physical And-1s in succession. He finished with 10 points and 5 rebounds. Logan Shoffner netted 13 points and grabbed 4 rebounds while Michael Murray debuted with 13 points and 7 rebounds. Following his 9 three-pointer performance in Week 1, Brian Rutledge sank two deep balls and finished with 8 points, 5 rebounds, 3 assists and 5 steals.

James Arnold works out from deep for the Patriots. #CTCAdultLeague pic.twitter.com/Q5YwKrrgOJ 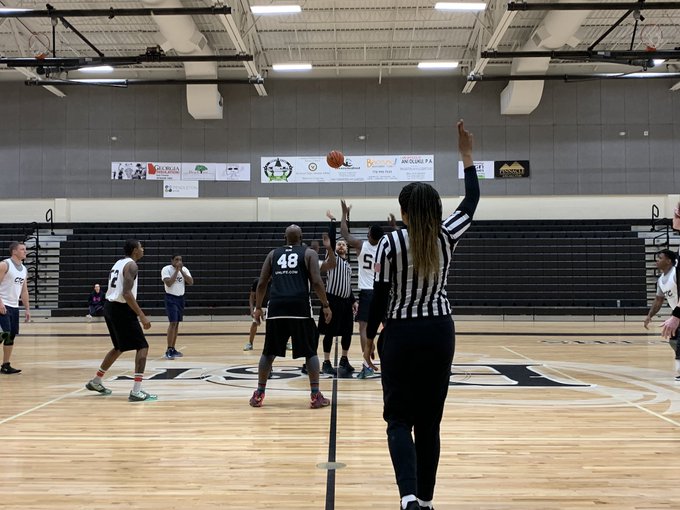 Familiar faces locked up in a battle of former UH foes as Next Level (1-1) controlled the game from the opening tip and held off any spurts that CTC (1-1) managed to muster. Team Captain Jeff Cox hit the free agency market and picked up two stars in Kris Johnson and Griffin Markwith, who completely change the complexion of their suddenly explosive team. Johnson drilled three straight threes in the second half to put the dagger in CTC as the former Tucker Tiger finished with a game-high 27 points, 9 rebounds, 3 assists and 2 steals. Markwith, still far from 100% after a bad foot injury, contributed 14 points, 18 rebounds, 2 assists, 1 steal and 1 block. Next Level led 29-20 at the half as new addition Garrett Francis tried to keep CTC afloat. The 6-foot-6 big man posted 20 points, 11 rebounds, 3 steals and 1 block. CTC’s backcourt struggled to hit shots to help out Francis. Jalen Clark had 10 points and 10 rebounds while Keenan Lewis tallied 16 points and 9 rebounds, but outside of Francis’ 3 threes, CTC hit just 3 triples. A bright spot was Jacques Wells, who is still battling a knee injury. He finished with 6 points, 3 rebounds and 4 assists. Next Level, even without Harrison Stewart, had enough of a supporting cast around Markwith and Johnson to get the job done. Cox finished with 10 points and 11 rebounds while Doug Rhodes scored 8 points in support.

Dewayne Lynch dumps to Kris Johnson for the And-1 #CTCAdultLeague pic.twitter.com/bckEx7Z6Co

Patrick Fischer drills a late 3 to extend the lead before Garrett Francis hits one at the buzzer.