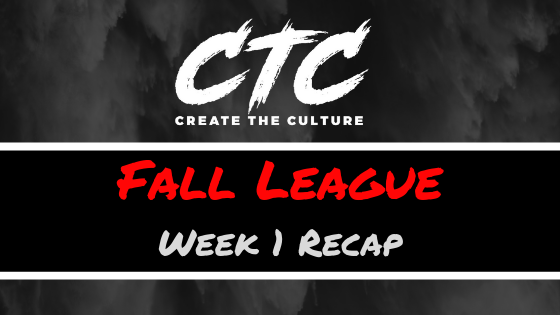 The inaugural CTC Fall League tipped off between familiar Cobb County foes Allatoona and Hillgrove. Hillgrove led 22-21 at the half behind 2020 6-3 W Nate Meshida‘s eight points, but Allatoona pushed the pace and wore down the shorthanded Hawks in the second half. Lighting quick 2021 5-11 PG Isaiah Logan orchestrated the Buccaneer offense with 7 points, 5 rebounds and 6 assists. 2021 6-2 F Kevin Taylor shined with his versatility, posting 8 points, 7 rebounds, 3 assists, 1 steal and 2 blocks, doing damage at the high post. 2021 6-4 F Cam Baldwin collected 9 rebounds to go along with his 6 points. Hillgrove saw 2020 6-0 G Jaden Hannon drill four threes en route to a game-high 18 points, 4 rebounds and 4 steals while Meshida finished with 11 points and 5 rebounds, but Allatoona’s inside-out punch of 2021 6-5 F Marshall Willingham and 2020 5-11 G Revay Shaw II in the second half proved to be too much. Willingham found himself at the right place at the right time often, crashing his way into the paint for buckets to tally 15 points and 4 rebounds. Shaw scored 13 of his 15 points in the second half, going 8-of-8 from the foul line.

A defensive struggle saw Allatoona score its first points of the half with a minute remaining, but thanks to stingy defense, the Buccaneers entered the half trailing 4-3 while G LaShawn Matthews powered Kennesaw Mountain with three points. The game became more fluid in the second half as 2021 5-10 F Shanique Reid started to score inside for the Mustangs, highlighting her game-high 7 points with a pretty up-and-under move. Allatoona continued to keep close and eventually made their move behind the play of 2021 5-10 F Jaasira Fossitt, who scored 5 points including a three-pointer, while blocking two shots on defense. 2020 5-3 G Grace Bosley had 4 points and 2022 5-6 G Alexis Redding hit a mid-range jumper to give Allatoona their first lead and momentum to seal the victory.

The Patriots erased a 27-19 deficit at the half to storm past the shorthanded Spartans behind pressure defense. South Paulding opened up at a break-neck pace thanks to the play of 2020 6-0 G Jared Amritt, who scored all 12 of his points in the first half before injuring his ankle. Amritt added 5 rebounds as well and his electric play in the open floor and ability to knock down the three left a lasting impression. 2020 6-3 SG Caleb Duncan had a game-high 16 points, 6 rebounds and 2 assists, drilling three three-pointers on the day. Duncan’s aggressiveness and the threat of Amritt on the perimeter opened up lanes for 2020 6-0 PG Jordan Goordrich to contribute 9 points, 6 rebounds, 1 assist, 1 steal and 1 block. Missing their top two post options, South Paulding was hurt on the glass by Paulding County’s length and athleticism. 2021 6-5 F Kervens Yacinthe took over down the stretch along with 2020 6-1 G Keon Sedgwick. Yacinthe double-doubled with 15 points, 10 rebounds, 2 assists and 2 steals; 11 of his points coming in the final 20 minutes. Sedgwick keyed Paulding County’s full-court press and came away with 14 points, 3 rebounds, 3 assists and 5 steals. Sedgwick didn’t force the issue on offense and let the game come to him while focusing on setting up his teammates in the first half before kicking it into another gear in the second. Unsung hero 2020 6-3 F Caleb Jarrell played exceptionally well from the opening tip. The grinding glue guy had 9 points and 4 rebounds, hurting the Spartans on the boards on numerous occasions.

Tight till the final buzzer, Cass outlasted Marietta 1 in an emotional game. Without star guard Travis Burrus, the Blue Devils turned to 2022 5-11 G Eric Howard and 2021 6-0 G Jayden Martin to carry the load. Martin had 6 points, 4 rebounds, 1 assist and 3 steals while Howard added 6 points, 3 rebounds, 1 assist and 3 steals, but Cass’ towering frontline was able to chew away at Marietta’s smaller interior. 2020 6-5 PF Alfred Washington turned heads with his bruising size, strength and agility. Looking more suited to play on the gridiron, Washington showed powerful finesse on the hardwood with 9 points, 6 rebounds, 1 assist and 1 steal. Washington handled the ball full-court and even knocked down a three-ball. He wasn’t the only impressive big however. 2022 6-6 F Zaylan Chaney didn’t light up the scoreboard but had 5 points, 2 rebounds and 1 block, flashing his upside with his length and athleticism. 2022 6-6 F Ethan McIntyre crashed the glass well and looked mature inside. He rebounded with two hands and never looked off balance. 2020 6-0 G CJ Pipkin had 10 points and 2 steals as a downhill slasher.

The rivalry between North Paulding and East Paulding led to a wire-to-wire close game with no separation. PG Speedy Vargas got North Paulding off to a quick start from her point guard position and was a source of energy on both sides of the floor as she finished with 6 points, 3 rebounds, 1 assist and 3 steals. Fresh of a Shorter University offer, 2020 5-9 G Kimberlyn Black countered with two late threes in the first half, including a stepback off the dribble, to trim the Wolfpack’s lead to 10-9 at the break. In the second half, 2022 F 5-9 Aliyah Washington made an impact for North Paulding. Physical and versatile with the ability to play multiple positions, Washington made big plays down the stretch and finished with 6 points, 5 rebounds, 1 assist, 2 steals and 1 block. 2020 5-7 G Jamiah Mott chipped in 6 points, 3 rebounds and 2 steals while 2021 6-3 F Taylor Cullinan provided two key blocks. The positionless Black led East Paulding with 7 points, 4 rebounds and 2 steals. The coach’s daughter provides great value with her ability to play every position on the floor. 2021 5-5 G Lucy Stewart added 5 points while 2022 5-9 F Halle Verkerk pitched in 4 points and 5 rebounds as a sturdy southpaw. New addition 2021 5-6 G Faith Lovejoy showed flashes of her playmaking ability, collecting 3 points, 4 rebounds, 1 assist and 2 steals in the loss.

The two travel ball teams showed their cohesion as they put forth the crispest girls game of the day. A 1-for-6 start from the foul line put the young Macon Mystics in a hole to open as they trailed 17-7 at the half. The Mystics continued to battle in the second half and cut the lead to 29-23 with 2:29 remaining, riding the play of Jones County freshman 2023 5-6 G Jada Morgan. The big bodied guard was strong enough to shield off defenders when attacking the basket and cashed in on her free throw attempts. She had a calming demeanor on the court and played like a veteran. Morgan had a game-high 10 points, 4 rebounds and 2 blocks. She was locked in a battle with EOTO’s 2020 5-6 CG Dasia Wyatt of Bowdon, a First Team All-Region 6A selection. Wyatt was Sunday’s most impressive senior with her athleticism and quickness in the open floor. The slashing playmaker put up 10 points, 9 rebounds, 3 assists and 2 steals. Though her jumpshot needs fine tuning, the lefty is a strong sleeper out in west Georgia with no offers. EOTO got good work inside from Pace Academy’s 2020 6-0 C Taylor Doucet who bullied her way to 7 points, 7 rebounds and 1 assist. Young talent was the theme in this game as the Macon Mystics boasted 2025 5-6 G Laila Harvey out of Rutland Middle School. Harvey more than held her own against rising seniors, posting 2 points, 2 rebounds and 2 steals. Her ceiling is extremely high, as is 2023 5-8 SG Briley Merrill of EOTO who played varsity at Ranburne High School in Alabama. Merrill projects to be a long armed perimeter defender with a three-point shot to boot. She had 3 points, 5 rebounds and 1 steal in the win.

The young and undersized Blue Devils had no answer inside for the fifth-ranked power forward in Georgia’s 2020 Class, 6-5 Sean Rutledge. The big man posted 18 points, 8 rebounds, 1 assist, 2 steals and 1 block, putting an exclamation point on his night with an alley-oop off the backboard dunk courtesy of 2021 6-3 W Kristian Ford who put together a strong game as well with 14 points, 1 rebound, 1 assist and 2 steals. Marietta battled till the buzzer however as 2021 5-11 G Gavin Long netted 8 points and 2022 6-1 W Bryant Elliott played with toughness adding 4 points. 2022 6-6 F Izyiah Nelson led the Blue Devils with 9 points, 3 rebounds, 1 assist and 2 steals. Nelson is still young but has the tools to become a very effective post presence in the near future for Marietta.